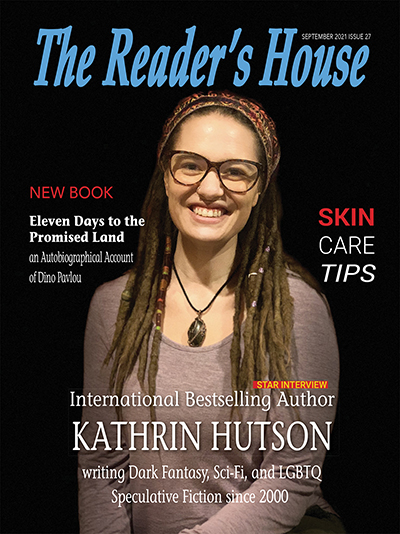 Kathrin also spends the other half of her time as a fiction ghostwriter of almost every genre, as Fiction Co-Editor for Burlington’s Mud Season Review.

In addition to writing her own dark and enchanting fiction, Kathrin spends the other half of her time as a fiction ghostwriter of almost every genre, as Fiction Co-Editor for Burlington’s Mud Season Review. She is a member of both the Science Fiction and Fantasy Writers of America and the Horror Writers Association. With Sleepwater Beat, she became an international bestselling author on both Amazon and Kobo.

Who are your favorite writers? Are there any who aren’t as widely known as they should be, whom you’d recommend in particular?

I’ve always been a fan of Stephen King, Diana Gabaldon, Jacqueline Carey, and George R. R. Martin. They’re all still fairly well-known. Octavia Butler is well-known too, and I still think more people would benefit from reading her work. My definition of “not well-known” may be a little different, seeing as some of my other favorites are authors most people “in my generation” (I’m in my thirties) generally don’t recognize—William Gibson, Kay Kenyon, John Irving, Alan Dean Foster. I just really love all of them.

What do you read when you’re working on a book? And what kind of reading do you avoid while writing?

I write fiction all day every day full-time, so I’m also constantly shifting what I read simultaneously. The only rule there (of my own making) is to not read the same genre I’m writing. Other than that, reading anything else is fair game. I read for fun, to escape or open my way of thinking, to discover new worlds and new authors—just like readers everywhere. More often than not, I’m also subconsciously looking for inspiration for my next book or series, which comes from completely different genres. And my job is to fit them into a new shape to bring them into my next idea!

What moves you most in a work of literature?

If anything can elicit a physical response in me while I’m reading, I know it’s good. Laughing out loud, popping a few tears, getting sick to my stomach, feeling my hands grow clammy or my pulse start to pound—that’s how I gauge the “moving power” of a work of fiction. What specific elements get me there? Wry and ridiculously dark humor are always a plus. Then come tortured and morally gray characters, impossible decisions they’re forced to make, the tragic lines between love and destiny being crossed (or never crossed at all, and which is worse?), tons of action, gore and darkness in all its forms (when used for plot and characterization purposes, never gratuitously), and the struggles against our heroes’ greatest foes—themselves. Honestly, now that I’ve written all this out, it just sounds a lot like what moves me when I read fiction is exactly the same as what moves me when I write it. And hopefully, my readers are moved by these things in similar ways.

Have you ever changed your opinion of a book based on information about the author, or anything else?

I’ve never really had an interest in following “celebrities” of any kind and their personal lives, whether that’s movie stars, public figures, mainstream authors, etc. Don’t get me wrong, there is definitely value in learning about the person behind the stories we know and love. I’ve been surprised so many times by discovering things about authors I never knew before and finding a certain satisfaction in knowing their beliefs, values, or actions “off the page” reflect what they touch on and portray in their work. And while I love being able to interact personally with my readers and fans as an author—and I certainly hope they enjoy it as much as I do—I wouldn’t want any of those interactions to color the way they think or feel about my work. That might be one of the beautiful pieces of writing a book and being able to send it out into the stratosphere for readers to find and enjoy on their own—that level of separation between the creator and those enjoying and appreciating the creation. Yes, there are so many pieces of me intrinsically tied to my characters and their stories. It’d be pretty impossible to separate the two at this point. But my stories are not me, and vice versa.

That was a long way of saying no, I don’t base my opinions about a book I’ve already read on anything I may or may not discover about the author. If I find something new about an author I already like that leads me to reading something of theirs I’ve never touched before, to me, that’s different. That’s about inspiration and being drawn toward work because of who’s behind it or what they stand for. But I do try to separate the two. To me, a book is either good or it’s not, and it’s up to readers to draw their own conclusions about what exists within the pages, including possible meanings, hidden messages, or maybe even the author’s intentions. I think the only thing that has made me change my opinion of a book I’ve already read is the act of reading it again. I either get something new and fantastic out of it, or it’s been so long since the first time I’ve read it that my tastes have completely changed and it’s no longer something I enjoy. I do make sure to reread every book on my “yes, this was amazing” list at least once, and then I keep it to reread again in the future.

What books do you find yourself returning to again and again?

Number one on this list is The Dark Tower series by Stephen King. Seven books of dark fantasy/western/horror mashup, and I’ve been a diehard fan of them all since I first discovered them my freshman year of high school. Just about a month ago, actually, I finished my trip to the dark tower for the 10th time, and the end of this series still hits me just as hard as it did the first time. And the second. And really every time I go through them. What I get out of this incredible saga is different every time, which is so much fun to watch as my own life experiences change and grow but these characters’ cycle stays the same. Or does it? (If you haven’t read this series and don’t know what I mean, I highly recommend it. To everyone.)

I’m also a big fan of Diana Gabaldon’s Outlander series and have read it twice so far. This was the first “technically romance” series I’d ever read where the romance shared the spotlight with every other fantastic element—action, intrigue, magic (if we’re counting time travel as magic), politics, history, and just all around pretty much everything. It sucked me right in, and I always love returning to that alternate-history world that still so closely resembles actually history. Then there’s Jacqueline Carey’s Kushiel’s Legacy series, which has so much more depth to offer every time I go through it.

There’s also George R. R. Martin’s A Song of Ice and Fire series, which packs so much into every book, it’s hard to remember it all from just one trip through. (I’m just repeating all my favorite authors, aren’t I? Go figure.)

Another great one, for anyone who enjoys graphic novels, is Neil Gaiman’s The Sandman series. I also discovered these in high school and managed to spend every single penny I earned my sophomore year on buying the entire collection to keep with me at home.  The artwork is incredible (different artists with every installment, at least the ones I purchased), and the storyline goes so much deeper than anything I’ve seen so far in graphic novels. It’s a fantastic compilation of mythology, cultural lore, psychology, humanity versus gods, the limits of immortality versus the staggering power of mortality.

And there’s also Charlaine Harris’ True Blood series. That was probably my first real foray into Urban Fantasy as a reader, and while I wasn’t generally into vampires and/or paranormal romances at the time, it sure did suck me in.

So I obviously reread a lot of books! And listing these off just made me even more excited to go back through them again. But that’s the real beauty of finding works that make us feel these things, right? We can return to them again and again, looking forward to all the new insights and discoveries a second or third or even tenth time, and hopefully dig up a few more things about ourselves in the process